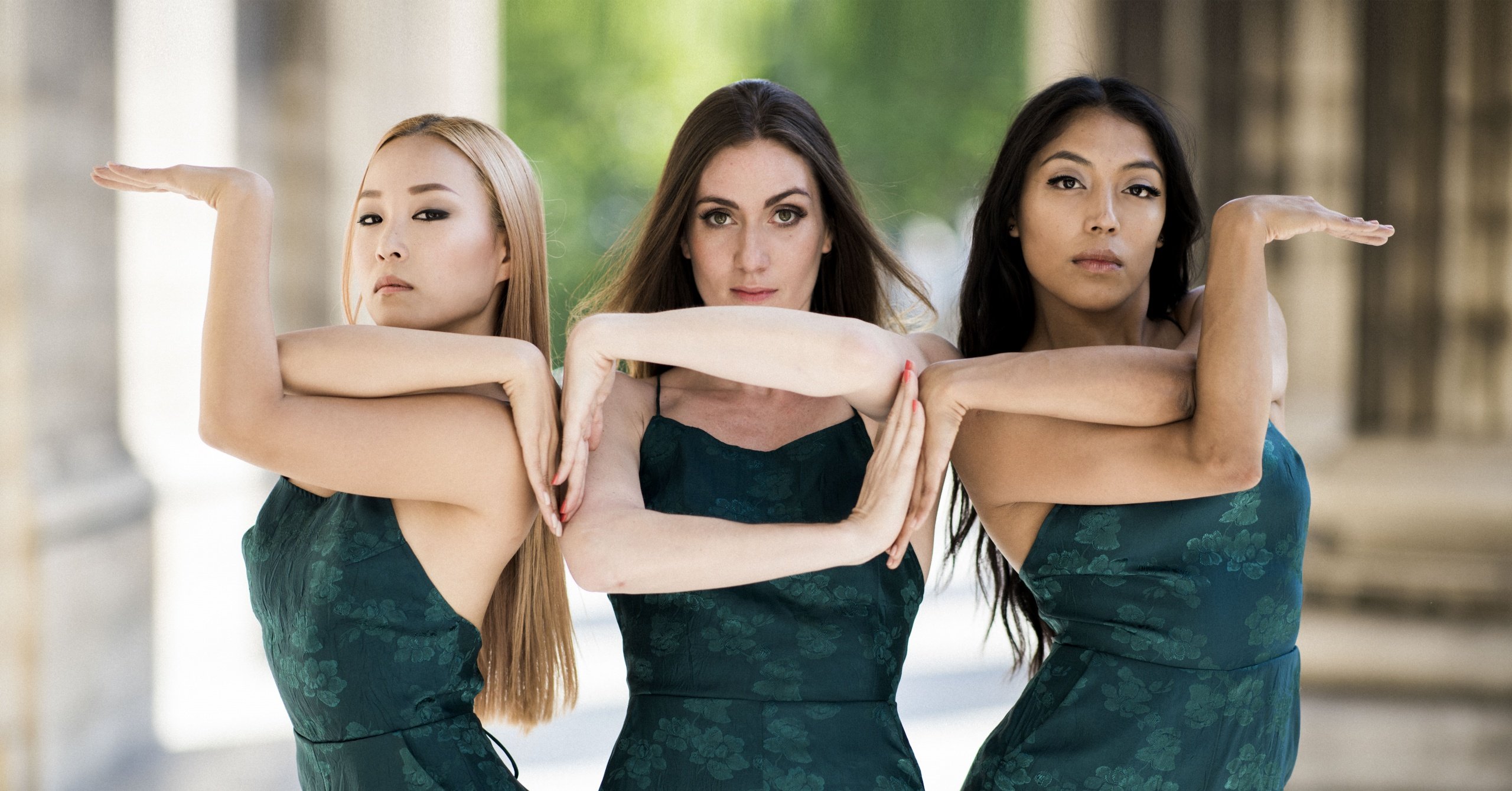 Femme Fatale is a group of 3 female international dancers: Marie Poppins, Lily Frias and Dassy Lee. They are based in Los Angeles, but are originally from different countries: France, Mexico and Korea. They moved to the United States to pursue their dreams as professional dancers and Choreographers.

They are mostly known for their strong abilities in Popping, Animation, Robot and a high level of musicality with a feminine touch. Their mix of cultural background and unique individual styles is what makes an original and a powerful female collective. They use their femininity as a strength, their technique as a weapon, and their passion as a power.

As a group, Femme Fatale performed for Bebe Rexha, Cirque du Soleil, Red Bull, Marc Jacobs and they have worked individually with artists and brands such as Madonna, Clavin Harris, Justin Bieber, Gap and Timberland. They have been starred in major dance TV shows: So You Think You Can Dance and America’s Best Dance Crew.

They are putting their style of dance in the commercial world, their goal is to be role models for women and inspire the future dance generation all over the world. They joined their strengths to create “Rising in Motion”, a thrilling theatre show empowering women, showcasing the different emotions and aspects of a strong woman’s journey in search for her dream and self- love.

Inyoung “Dassy” Lee is a world-renowned dancer with years of both underground and industry achievements. She was the first South Korean dancer featured in the award-winning TV program ‘So You Think You Can Dance,’ finishing in the Top 8 of over 4000 contestants.

She has been featured in national commercials for brands such as FitBit, Timberland, Splat and Mastercard as well as music videos for Calvin Harris, PARTYNEXTDOOR, Pitbull and One Republic. She has also performed in Cirque Du Soleil Monte-Carlo Monaco Shows, Red Bull BC One World Final Guest showcase in Zurich and performed several times in Breakin’ Convention which took place at the world famous APOLLO Theater, Sony Centre in Toronto Canada, Sadler’s Wells in London.

Her strong popping style which makes her very unique as a female dancer led her to win many dance competitions around the world. Over time she has taught at Millennium Dance Complex LA, Debbie Reynolds, Broadway Dance Center New York, EXPG New York, Dartmouth college, Flying Steps Academy in Berlin Germany, Creative motion dance studio in Vancouver and many more. Her choreography shined at Carnival LA – co choreographed with her crew members Marie and Lily, the video of the performance got over 30 Million views! Her passion for dancing, choreographing, teaching and artistic directing will bring many more incredible memories.

Marie “Poppins” Bonnevay first discovered Street Dance in her home country of France. She learned about the different elements of the culture and started training in Locking, Breaking, House, Whacking and Voguing, but found her natural strength to have always been in Popping.

She made it her goal to move to the United States and got the chance to in College, when she was accepted as an exchange student in Chicago. After her graduation, she moved to Los Angeles where she started training more than ever. Marie started entering competitions and taking them left and right (Hip Hop International Las Vegas, Bboy Summit, Step Ya Game Up New York, Soul Session Norway, Hipopsession France). She became part of Culture Shock LA, Style Elements Crew, and We Are Heroes for America’s Best Dance Crew. Marie also got her Master Degree in International Business at ITESM Mexico.

In the commercial world, Marie has worked with artists such as Madonna, Justin Bieber, Busta Rhymes, Ne-Yo, Celine Dion, Dj Tiesto, Rita Ora, KRS One, Snoop Dogg, Common, Ludacris. She was also casted in the movie STREETDANCE 2 and has starred in many commercials (Google, Microsoft, I Robot). As a choreographer, she has worked with Brandy, Kelly Rowland, Cara Delevigne and Dancing With The Stars. Marie was the first french dancer showcased on So You Think.

You Can Dance. Marie also teaches workshops all over the world and has judged dance competitions in more than 50 countries.

“Dancer born and raised in Mexico. Currently residing in LA and working as a professional dancer. With a journey of almost 15 years starting in Mexico then later on moving to the US to participate on MTV’s “Americas Best Dance Crew” season 7 with the first ever Mexican crew to appear on the Tv show.

Starting in dance at an early age with a training in jazz, ballet and contemporary she found a special passion in the culture of Hiphop and its history. Through extensive training in Mexico and traveling to the US to learn the original styles from the pioneers and teachers is where she found street styles and the art of freestyle. Focusing later in specializing in the styles of Popping and Whacking, and now performing, battling and sharing these styles around the world in workshops, dance battles and performances.

Through out her career she has been featured on projects such as the first Mexican Dancer ever to participate on “So You Think You Can Dance” season 12, Cirque Du Soleil MonteCarlo in Monaco, American Music Awards with Tracee Ellis Ross, Coachella 2019, Puerto Rock Steady, Sephora, Anthropology, Bebe Rexha, Zedd, Maren Morris, Meghan Trainor, Mya, Maluma, national commercials for Target, Acura, Old Navy. Other credits also include touring the US with the acclaimed holiday show The Hip-Hop Nutcracker, performance exhibition on the stage of Red Bull Bc One Zurich 2018, Singapore F1 Grand Prix, Breakin’ Convention London and US, Dance Your Style Red Bull US, world finals and many more. She is apart of Femme Fatale crew, an international dance trio based in Los Angeles with whom she travels with performing, teaching, judging and battling all around the world. As performer and teacher she continues to work hard to break barriers as a mexican dancer and inspire other dancers around the world to pursue their dreams”.

You have come to the right place. 🙂